Pontus Aberg (Åberg) is the third of the trio of Swedish “berg’s” we have ranked in the first round.  He follows the previously profiled Filip Forsberg and Sebastian Collberg.  Aberg is a left winger who has spent the majority of this season playing for Djurgardens in the Swedish Elite League.  Aberg was nominated for the Elitserien rookie of the year award but eventually lost out to Minnesota Wild Prospect Johan Larsson.

Aberg burst onto the scouting scene at the 2010 Ivan Hlinka tournament, and never looked back.  He also played for Sweden at the 2011 IIHF World Under 18 tournament.  Aberg combined to score 6 goals and 6 assists for 12 points over just 9 games in the two tournaments.   Aberg also made this year’s Swedish World Junior Championship Team, however he suffered an injury in the pre-tournament exhibition games and was forced out of the tournament.

They say that speed kills, and if thats true then Aberg is a stone cold killer.  He’s an extremely fast skater, with great top end speed.  He’s agile and shifty, has great balance, good acceleration, and excellent edgework.  Aberg combines this skating with an excellent arsenal of shots.  He has a hard, heavy wrist shot which he gets off quickly thanks to a great release.  He also has a heavy slapshot and a good one timer.  Aberg is a good stickhandler who makes creative moves and is able to beat defenders off the rush.  Aberg is a much better goal scorer than a set up man.  He definitely prefers to shoot rather than pass.  As a set up man, he lacks ideal vision and passing instincts.

Aberg is courageous player, how loves to get involved involved in physical play.  He is willing to battle hard on the boards and works hard to get to the front of the net.  Aberg is an aggressive forechecker who just loves to get in and hit the man with the puck.  He’s an absolute fearless player.  Aberg will need to put on more size and strength to continue to play this style at the next level.

Aberg is a hard working defensive player, and a willing backchecker.  However he lacks natural defensive instincts, and often has a tendency to get out of position by running around in his own end.  His defensive game can best be described as a work in progress.

We compare Aberg’s game to a cross between Brian Gionta of the Montreal Canadiens, and Michael Grabner of the New York Islanders.  We feel he has the potential to become a goal scoring top 6 winger at the next level.

… and thats the Last Word. 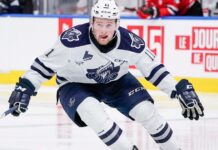 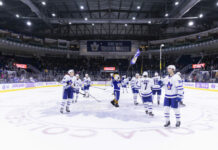